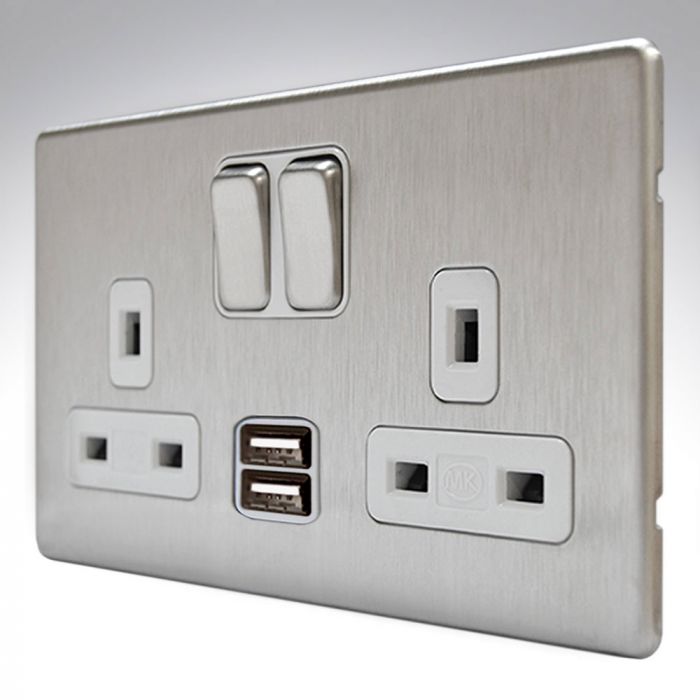 It's official, the results are in. The grip of the smartphone or mobile device has well and truly taken hold of all of us. It's understandable, they're just so convenient, who needs a laptop when so much can be done on your smartphone or tablet? Except for one thing, the batteries don't last as long as you need them to, in fact it is guaranteed that at the very moment you need your phone to give you its best, you only have the most minimal battery left.


Imagine then a way of charging your mobile device that is easier than carting your charger around with you or having to unplug other items in your home. The future of charging your mobile device is here by the way of the USB Double socket. You may have seen them before, a standard double socket with the added feature of two USB type A charging sockets. With an output of 5 V DC +/- 5% 2.1 A (total for 2 outlets), it is compatible with hundreds of mobile devices, including Apple iPads, iPods and iPhones, smart phones, tablets, ebook readers, MP3 players, portable games consoles, digital cameras and more. However, the MK K24343 USB double socket takes things a little further.

Featuring 'Dynamic Device Recognition' technology, a system that counters the different way in which devices charge themselves. DDR recognises which kind of device is plugged in and alters the charge accordingly, making sure all your devices are charged in the optimum way.

As a double socket, it operates in the way you would expect, but with the added benefits achieved from installing an MK double socket. Constructed with the installer in mind, its clearly marked terminals are funnelled with captive screws for ease of installation, keeping fitting time to a minimum. Benefitting also from dual earth connections for high fidelity earthing when fitting must comply with section 543.7 of BS 7671 where the equipment installed has high conductor currents.

Also featuring MK's unique 3 pin shutter system, preventing access to live connections unless all 3 pins of a standard UK 13A plug are inserted with equal pressure. This means that if you have a plug with a broken pin, connection cannot be made. This coupled with double pole switching with its neutral break first, make last feature, you can be sure the K24343 is the safest on the market.

Build Your Own Bespoke Edge Switch and Socket Plates
The Edge range not only comprises the full selection of switches, sockets, TV points and fused connection units but also two ranges of modular plates, which when used in conjunction with MK's 'Grid Plus' and 'Euro Data' modules allows you to build your own bespoke wiring accessories, for applications as varied as kitchen appliance wiring or Sky TV installation.

If for example you require a plate that combines a BT socket with a Satellite socket you would use the K14182BSS Edge plate and the K5820 BT module and K5855 F type Satellite module from the Euro Modular range.

Or maybe you wish to build an Edge plate which comprises 20amp switches for your Dishwasher, Oven, Fridge and Freezer: You would use the K14334BSS four gang Edge plate and 'marked' modules from the MK Grid Plus range.